From Ontario With Love: A Celebration of Hope

The Provincial ICI (Industrial, Commercial & Institutional) Collective Agreement has been ratified. Proposed improvements and changes to the agreement that expired on April 30, 2019 have been approved by the LiUNA members province-wide and will be implemented in the collective agreement. 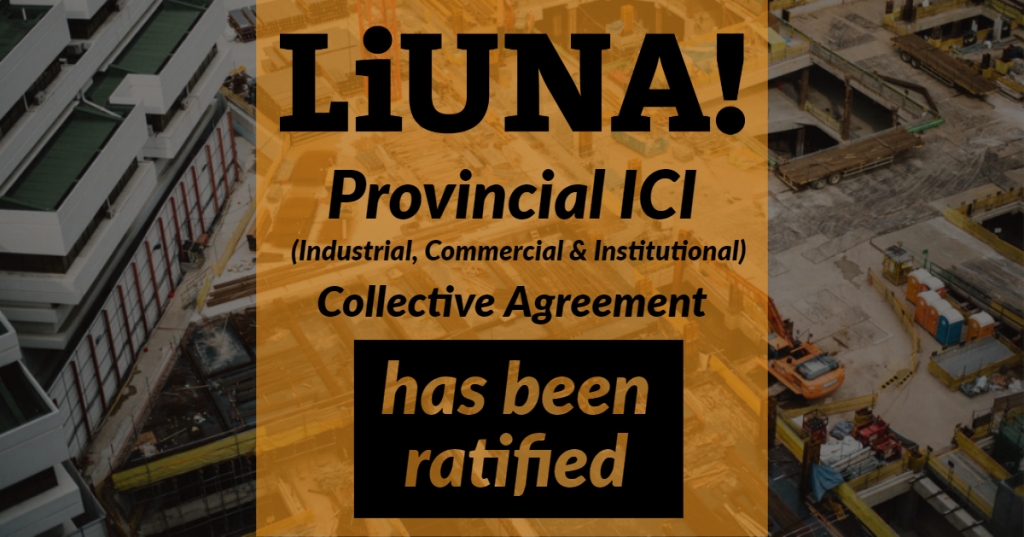 Other provincial collective agreements that expired April 30, 2019 that have been ratified include:

Thanks to all the members for their support during the negotiations!

We are now accepting applications for the 2018-2019 Scholarship Awards. All the information and documents can be found on the Scholarship page.

The Members’ Family Summer BBQ will be held on Saturday, August 18, 2018. Kindly return your confirmation slip (included in your invitation) by July 20, 2018.

*Retiree monthly union dues will not be affected by this increase and will remain $8.00 per month.

Attend the memorial at the CLC Monument in Vincent Massey Park

SINGERS AND POETS
SEND THE CBTU YOUR AWESOME SONG OR POEM 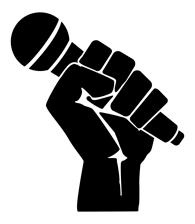 The creator of the selected submission
will receive $5,000 and will be invited
to present the song or poem in Ottawa
at the unveiling ceremony of the
Canadian Building Trades Monument.

ARE YOU…
→ A Canadian citizen or permanent resident?
→ A member of a CBTU affiliated union or family of a member?
→ The creator of an original song or poem that celebrates
Canada’s building crafts and trades?

THEN CBTU IS LOOKING FOR YOU!
APPLY ONLINE BY APRIL 25, 2017
TO FIND OUT MORE: canadianbuildingtradesmonument.ca

Please check out details on our Facebook Event Page
and let us know if you are attending to receive after-party tickets*!
*limited quantities available 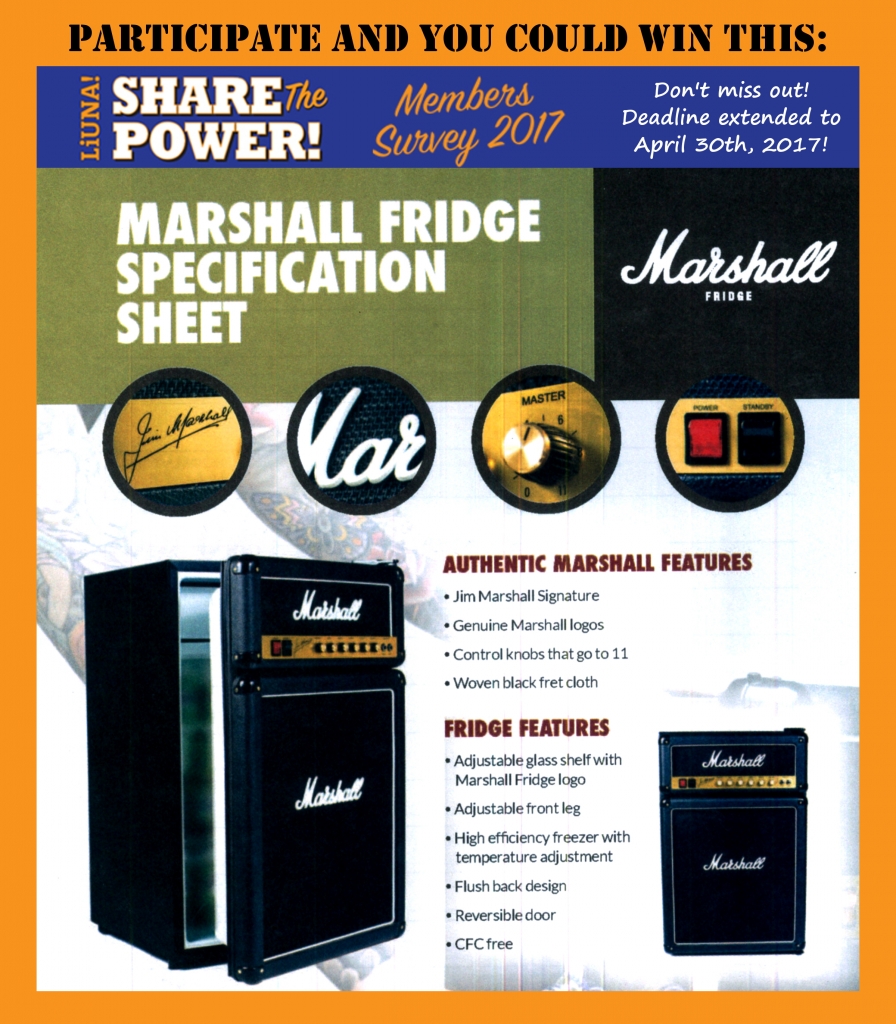 I am writing to you on an extremely important matter to our union.

Thousands of well-paying jobs in the wind energy sector are at stake.

Since 2008, wind energy projects have invested over $14 billion in Ontario’s economy and have created over 200,000 jobs in Ontario, many of which have benefited LiUNA members.

The government of Ontario has recently indicated that they may be waffling in their commitment to many of these high paying jobs. We cannot stand still and let this happen.

That’s why we have played a lead role in creating the Renewable Energy Alliance of Ontario (REAO). REAO is a broad coalition of employers, labour and industry groups dedicated to working with the Ontario government to ensure renewable energy, including wind, continues to play a vital role in Ontario’s energy mix.

Our alliance has created a web portal that allows you to express support for these jobs to your local member of provincial parliament with a few simple clicks on your keyboard. I urge you all to go to www.renewourfuture.ca to make our union voice heard.

Together we can show the government that our voices matter. We must act now to protect well-paying jobs for our brothers and sisters.

On October 27th, 2016, the Labourers’ International Union of North America, Local 527 & 527A, was proud to present a donation of $10,000.00 to the Children’s Hospital of Eastern Ontario. Mrs. Chantal Charbonneau, Director of Community Engagement & Annual Giving, graciously accepted the donation on behalf of CHEO. 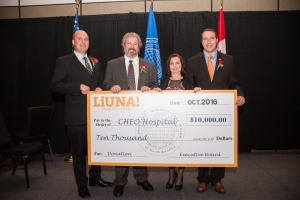 The collapse of the Heron Road Bridge remains one of the single largest construction workplace disasters in Ontario and one of the biggest in North America.  On that fateful afternoon, nine workers lost their lives, including three LiUNA Local 527&527A members, Brothers Domenico Romano, Joao Viega & Raymond Tremblay, and more than sixty were injured altering numerous lives forever. 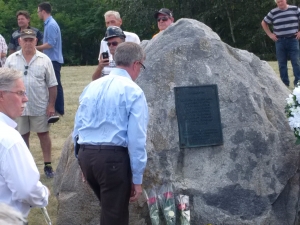 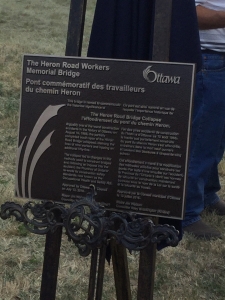 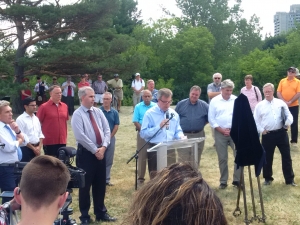 On July 14, 2016, the Labourers International Union of North America (LiUNA), signed a historic Memorandum of Understanding (MOU) with TransCanada, along with the Pipe Line Contractors Association of Canada (PLCAC), the United Association of Journeymen and Apprentices of the Plumbing and Pipefitting Industry of the United States and Canada (UA), the International Union of Operating Engineers (IUOE) and Teamsters Canada. By signing this MOU, TransCanada agreed to assign to the signatory Unions all new pipeline construction and pipeline conversion work on the Energy East Pipeline Project.

This is significant news as it guarantees that our union members will perform work on Canada’s biggest infrastructure project. This can represent thousands of jobs for members of the unions involved. 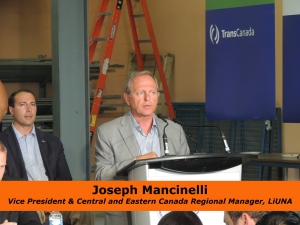 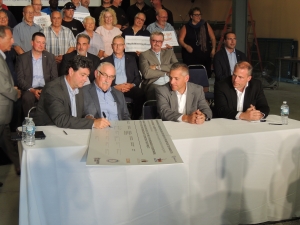 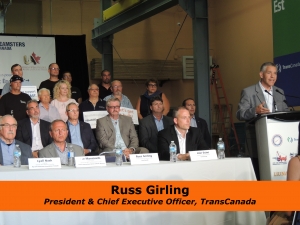 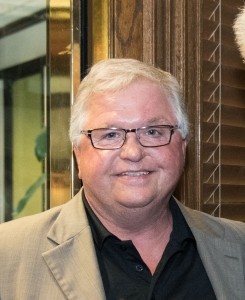 It is with the greatest of sadness that we deliver the heartbreaking news of the sudden death of our colleague and friend, Executive Board Member and representative of LiUNA Local 527 – 527A Murray Ostrom on Saturday, June 25, 2016.

A strong advocate of members’ rights and a proud member of this organization for over 35 years and an employee of Local 527 – 527A for approximately 25 years, regardless of the challenges Murray may have had along the way including the tragic death of his son last year, his days became bearable by bringing laughter to everyone else. Everyone who had ever had the privilege of working with Murray found such pleasure to work with him; he will be profoundly missed here leaving behind now only those fond memories we have of him.